On my way back home after shopping last Friday (I took the long route home), I saw the results of the demolition of the old Deep Blue building on the Strand beachfront. I stopped, donned my face mask, and took a few shots for record purposes.

Once I arrived back home, I posted the above image on our local community's Facebook page. It turned out to be my most popular Facebook ever - by miles! It's now five days later, and at the time of writing this post, 348 people had emoji'd the page, 76 people had made comments, and 111 had shared the post! 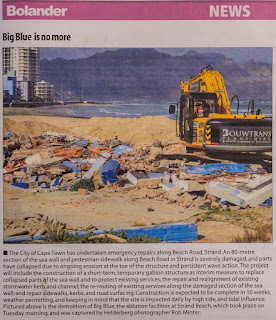 In addition, one of my other shots was used in the Bolander, a local newspaper distributed each Tuesday. Admittedly it was featured at the back of the newspaper, but it was there! The article refers to the building as "Big Blue", but it should read "Deep Blue". Be that as it may, I was quite chuffed at the image being deemed newsworthy enough to be published.

I found the variety of emotions expressed by the folk on Facebook extremely interesting, From comments like "It was an eyesore", "About time too", "Butt ugly", and "Finally" to "Fond memories", "Very sad", "Will miss that blue building", and "Very sad and tragic". It's incredible how much interest and emotions one photo can generate!

Because of the interest shown, I thought I would try to gather some information about the building's history, but sadly I couldn't find anything definite on the Internet. The most authoritative thing I could find was from an article in the District Post (another local newspaper) which stated "It is assumed the building was built in the mid 1970s as an ablution block and café. It has since become defunct and derelict. There is also no proposed redevelopment".

So - as another Facebook poster put it "The end of an era".