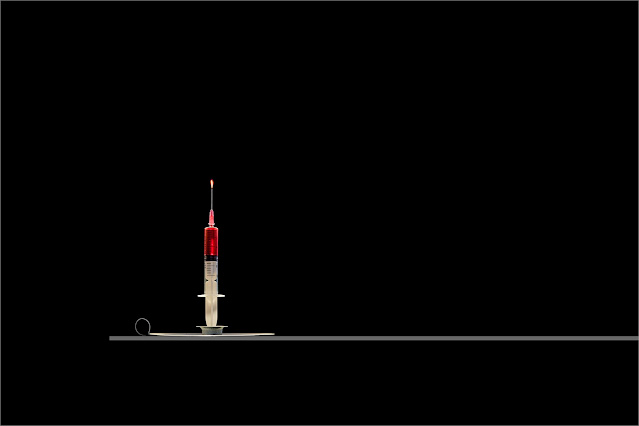 Every year the Photographic Society of South Africa hosts a competition, the Marieke Bruwer Award for Visual Art (https://www.pssa.co.za/competitions/marike-bruwer-award). I took a chance this year and entered the above photo into the competition, and am absolutely honoured to have won the award for 2021! Reading the judges' comments was the cherry on top!

The idea for the photo started with all the talk and excitement regarding the introduction of the Covid-19 vaccine into South Africa. One couldn't escape from all the news about it - with not all the reporting being positive. During the same period I came across a photo of candles that had been lit for people who had died after contracting the virus and wondered whether the whole situation could be captured in a single photograph.

It took a while for me to get the concept together. I wanted to keep it as simple as possible, and once I had the picture in my head, it was fairly straightforward from there. First thing was to get all the pieces together, and after unsuccessfully asking a few friends if they had an old-fashioned candlestick holder that I could borrow, eventually put a query on the Facebook Somerset West Community page for one. I had a few responses, and the one in the photo was my favourite. It turned out the lady had no use for the set of two anymore, so gave them to me.

I decided on the large black background to represent the huge amount of darkness that the virus had caused, from things like loss of freedom and jobs, to, of course, lives. I thought about which colour the vaccine should be, and while this represented the "hope" side of the equation, I chose to make it red to indicate caution, as there was still a huge amount of discussion and argument around whether the vaccine would work or not.

I had the syringe from a previous shoot when I was working with some water droplets, but getting the flame proved a little more difficult. I tried copying and pasting from flames from matches, etc., but they didn't work that well, so in the end my wife used a chef's blowtorch to heat up the end of the needle until it got red hot and looked like a flame.

Please click on the photo to bring up a higher quality version.