Ok, so while my commitment to do more blog posts this year is still fresh in my mind, here we go.
Club competition night was held on Wednesday 22 January 2020. My favourite image out of the four submitted was the one at the top of this post. It was entered into the Print Open category, but unfortunately it only received a Silver award. The judge seemed to like it, and didn't have any negative comments, so not sure why it didn't score better.
I must say I also enjoy my other entry in the Open category, this time in the Digital category, which was another macro shot of a soap bubble (I submitted my first one in November last year), and this received a Gold award.
The set subject for the month was "City life". I found this to be quite a challenging task, and for my Print entry, I chose a photograph taken of the blind guitarist who plies his trade on the streets of Cape Town. He featured in a legal battle with the Cape Town City Council a few years back, and the case made headlines in the local newspapers. The one headline, "Blind injustice", is attached to the wall behind him and now features as part of his stage.
This image received a Silver award. The judge liked most of it, but felt that the left hand side was extraneous and would have been better cropped away. 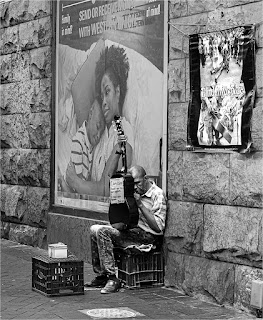 I am including a cropped version of the photo. You can make your own decision as to whether it is superior to the original or not.  Personally, if the subject had been Street Photography, then I probably would agree, but think the uncropped version also shows some of the vast differences so typical of City Life, with a talented blind man having to beg for his existence, whiile just a few metres away people pay R200 for acrylic nails. Anyway, just my thoughts. Win some, lose some!

My Digital entry for the Set Subject was taken at the top end of town, and features quite a common site around our City, namely tourists / citizens enjoying a guided trip around the City and surrounds while in and on top of a tour bus.
The major bus company in the Western Cape is Golden Arrow, and their slogan is "The bus for us". This image title is obviously a play on that, as not everyone has the time nor cash to make use of it. I decided to keep this shot in colour, as it is one of the bus' major characteristics.
The image also received a Silver award.
Till next time.
at January 26, 2020 1 comment: