We woke to a very pleasant, though cold, morning.

We again had breakfast outside on the patio, and were treated to the (well, for us anyway) unusual site of a number of paddlers out in the bay, but all without paddles. Everyone was simply using their arms and hands to propel themselves! Talk about hard work!

After breakfast, we went off in search of Boulders Beach, where the penguin colony is situated. I'm ashamed to say that after all these many years, both of us have never visited! We found parking just outside Seaforth Beach, and received some information about Boulders from the car attendant who was on duty at the time. It was quite a cold morning, and we decided to warm ourselves up with a walk from there to Boulders - not very far at all. 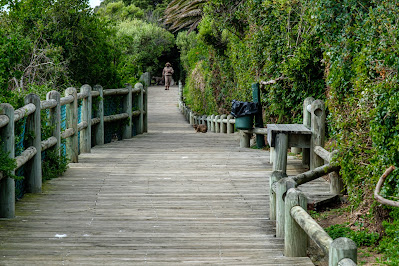 We arrived at the entrance a few minutes later, and decided just to take a walk along the boardwalk, instead of entering the reserve itself. Almost immediately we saw our first bits of life - not penguins, just a dassie and one of the many attendants who are on duty there! 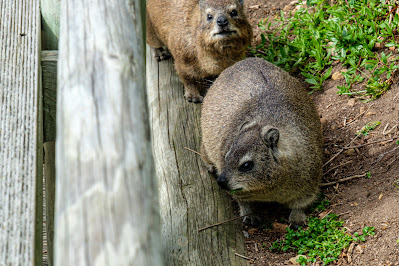 As usual, there were many more than just one dassie, and being as curious as they are, we had two come quite close to have their photos taken (and of course, to see whether there might have been any titbits forthcoming)! 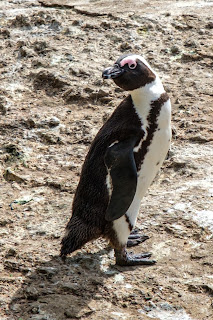 The stroll along the boardwalk was fabulous. Lots to see along the way, including some penguins living in some specially designed "homes". Couldn't believe the amount of noise the penguins make, nor the amount of "guano" they leave behind! One of the authorised "locals" is shown on the left, and two "squatters" below! 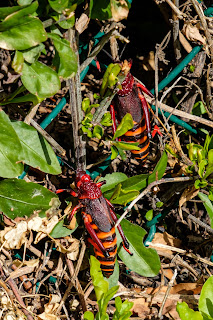 There was also a fair number of the natural structures from which "Boulders Beach" got its name, and you can see some of them here, together with some of the colony's local residents. 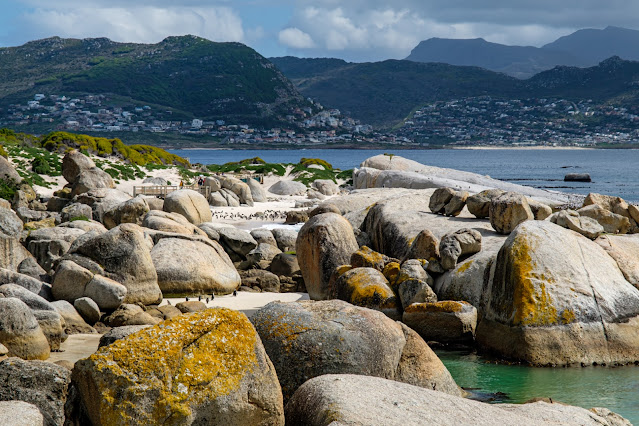 When we got back to the parking area, we stopped off at the local curio shop, where Jacqui found an addition to her fridge magnet collection. Both of us were extremely warm when we arrived at the car, so Jacqui removed her jacket, and I took off the jersey I was wearing. Problem was that in order to remove the jersey, I had to take off my spectacles. Having yet another of my "senior" moments, I decided to put them on top of the car. And then having yet another moment (they must have been on special that week!), we drove off leaving the specs on the roof of the car.
We went off in search of some whales that we were told were out, and after passing Miller's Point, driving for about ten minutes, Jacqui spotted a few. So I pulled over so that we could get a better view, and then the realisation struck that I didn't have my specs with me! Realising what had happened, we rushed back to the parking area, but couldn't find them. We spoke to the car guard on duty, who told us he had spotted them on the ground just a few minutes before a Mercedes drove over them. He went and fetched the mangled remains from his hut, and they were damaged way beyond repair!
I had my cataracts removed and replaced with new lenses about 4 years ago, with the result that my long distance viewing is quite good, so driving without specs is not a problem at all. So it wasn't a total train smash!

We had planned to take the drive around Cape Point. through Scarborough, and past Kommetjie on the way to Chapman's peak anyway, and I said to Jacqui that there must be a Clicks store somewhere along the way, where I could buy a cheap pair of reading specs to tide me over till I could get an optometrist appointment once we got back home. I found a pair of specs at Clicks at the Longbeach Mall, and they proved adequate for the remainder of our break.

A quick lunch at the Spur there, and then we took the long, but scenic, drive back to Fish Hoek along Ou Kaapse Weg and then Boyes Drive.

Spent the rest of the evening relaxing, while it got colder and colder outside.

We woke to a morning that was freezing cold, and which was accompanied by gale-force winds. We decided to have breakfast at the local Spur, and it was good value, well-cooked and very presentable.

We followed that with a drive back along Boyes' Drive, and then went back to the Noordhoek area along Ou Kaapse Weg. We decided to have a stroll around the Sunny Cove Mall (we hadn't been there for years and years), and were surprised to see how little it had grown since our last visit. The development of the Longbeach Mall, which we visited on the previous day, seems to have been preferred for development both by developers and outlets.

I was hoping to get a shot of Long Beach, so we took a short drive up the start of Chapman's Peak, looking for a suitable spot to stop. Eventually found one and parked, and then went to take the shot. Well - the wind was so strong I could hardly stand! The weather generally was poor anyway, but even a tripod would not have helped get a decent shot. I took a couple anyway, and this is the best of the bunch. The Kommetjie lighthouse can be seen in the far top right of the image. 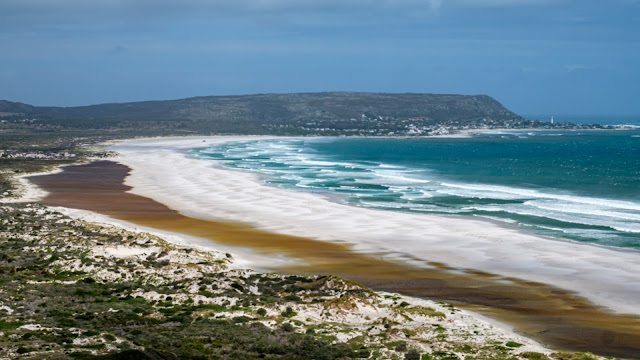 Freezing cold, I got back into the car and we went off in search of lunch. The obvious stop was the popular Noordhoek Farm Village, so that's where we went. First stop was Cafe Roux. We had visited many years previously, but it would appear that the Covid-19 curse has taken its toll on what once was a fine restaurant. All that was on offer was a pay upfront and order your food section, a place to wait to collect your order, and then some tables where you could choose to sit! Nice for some, but just not our style!

From there we went to The Foodbarn, an eatery that had received many rave reviews on the internet. It was quite full, so it looked like a good choice. When we checked the menu, however, we found that the cheapest bottle of white wine (the "house" wine") was R180. Now we don't mind restaurants making a fair profit on the food (especially the food) and wine that they serve, but really today, especially after how Covid-19 has wrecked the economy, and the income of individuals, that's pushing it! Once we saw the prices of the food on offer, and the selection on offer, we politely got up, excused ourselves, and left! Just not for us, thank you!

We then decided to go back to the Brass Bell for lunch. Took a lovely drive through Sunny Cove, and then along the road leading to Fish Hoek, where we passed a flat that we once had a look at as one of our options to purchase as a holiday weekend place. In the end we chose the flat in Melbosstrand, and in retrospect, it was a fantastic choice. If we hadn't chosen Melkbos, I would have missed all those wonderful shots that were on offer from our balcony. If you would like to see what I mean, click on this link: Views from the balcony.

When we arrived at the Brass Bell, the weather was so poor, and the seas were so rough, that the whole bottom section of the restaurant was closed. So upstairs we went. They had just started with their Summer specials, and while Jacqui decided to try their burger, I decided to give their chicken curry a go. Ordered it done medium, and I can honestly say it was absolutely delicious. It was served with a pappadom, white and yellow rice, chutney, a tomato and onion salsa, and a tzatziki sauce, and I left nothing on the plate except the spoon and the fork! Seriously recommended!

We had a window seat and thoroughly enjoyed seeing the waves break over the pool walls. After lunch we went to the outside dining area (obviously deserted at the time) to take some more shots. It proved more difficult than I thought, with lots of spray from the waves and wind meaning that the camera had to be constantly wiped off. The following demonstrates what I mean. 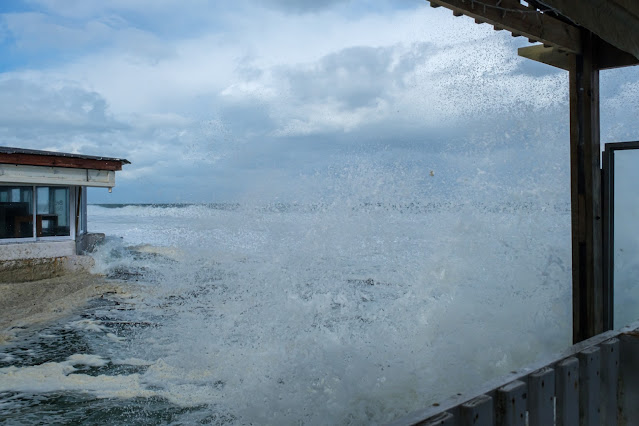 After trying for about half an hour to get a really decent shot, we were so cold that we decided to call it a day and return to the warmth of our flatlet.
Day 5 - Friday
I had been able to secure an optometrists' appointment at 12h00 that day, so we packed up nice and early. But not before being able to admire and appreciate a beautifully moody morning. This was the view from the outside balcony. 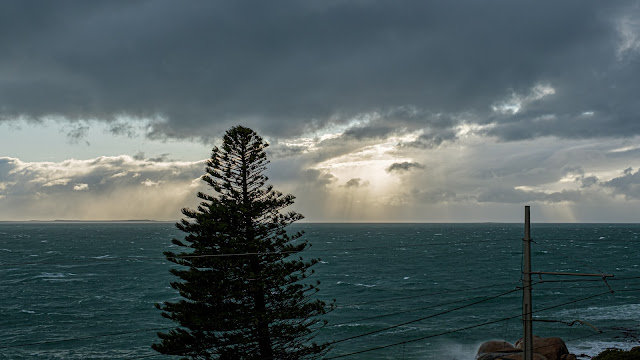 It was a fabulous and different break - short but most relaxing. Our thanks again to our hostess, Lorraine. We will be back!