I've been a member of the TPS since February 2014, so am now in my fourth year of membership. In that time, I've been able to win the odd category at our monthly meetings, but this month, for the first time, walked away with the overall "Image of the month" award - plus the floating trophy to boot!

To say that I'm feeling very honoured doesn't even come close, and being able to hold the trophy during the month that I turn 70, makes it even more special!

Coming after a month of receiving two Silver and two Bronze awards, I wasn't feeling that confident, even though I really like the image that won this month - it's just the type of photo that I enjoy - simple and uncluttered. It took numerous visits to the local Sonstraal dam before I finally got what I wanted - it was either too cloudy, too windy, or too wet, but on this day it was reasonably calm and partly cloudy, and the gentle blue and white reflections on the water provided just the contrast I was looking for. It might not be everyone's cup of tea, but for those who might be interested, here is the photo. Click on it to bring up a clearer and more defined version. 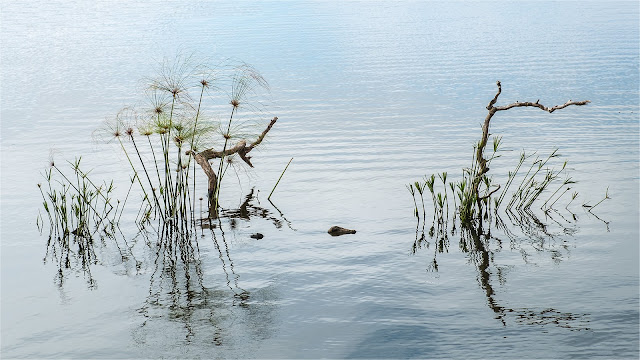 I will be catching up on all the previous 2017 TPS meetings over the next few days (am just a dash behind as my last post was last year!)