Wow! Talk about total carnage!!! It's been a while since a judge has dished out so many poor scores for a competition evening. And it was the first meeting I have attended where a number of images received a "No rating" award. Oh well - time to pull the socks up and try and catch up next month!

The set subject for April was "Panning" - the art of capturing the effect of motion while using a moving camera. It's not my favourite type of photo, but it was a good learning opportunity - and a real challenge! I tried to get some inspiration from images already on the internet, but most are shots that have been done again and again before, and I wanted something different.

So Jacqui and I set off one Saturday morning to take some shots of one of our beautiful nieces, Bianca. I am really grateful to her for agreeing to give up some of her weekend time to help me out. What I was wanting to achieve was a panning image of her on a swing. Well - it proved incredibly more difficult than I expected. The time period between focusing on the subject at the top of the arc, and then following it through to the end of the arc is very short. In addition, there were things like poles getting in the way, and to top it all the panning motion was in a curve instead of in a straight line. So while the idea was different, the end result didn't quite match up to expectations.

I was able to get a number of shots which I liked, but unfortunately in all of the photos, there was not enough of the subject in focus. So I decided not to use them for the competition. In the end that proved to be a wise decision, as the judge would have had a field day marking the images down! But, it was fabulous spending some quality time with Bianca, though I'm sure she would have had woken with some stiff arm and leg muscles on the Sunday morning! 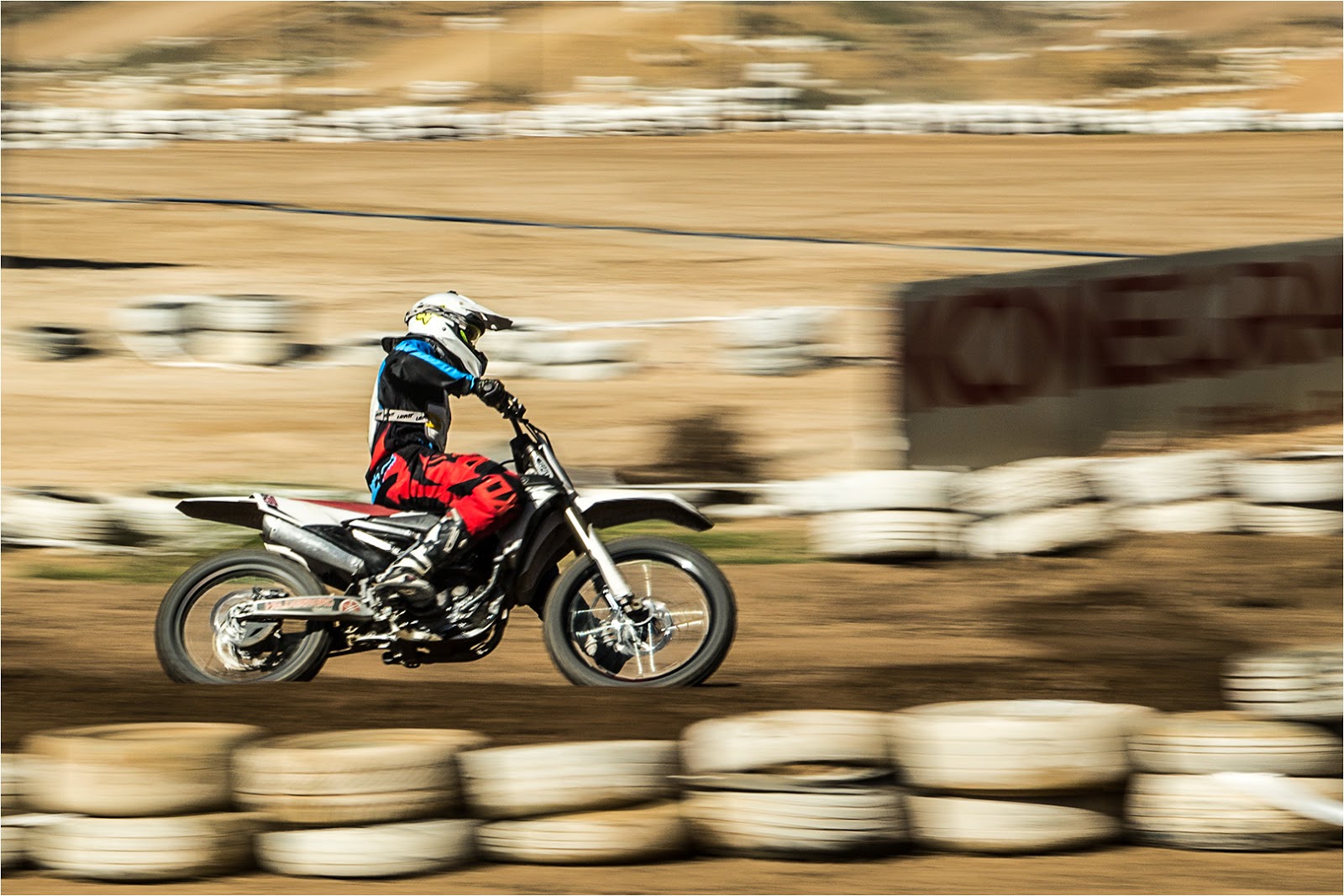 After packing up and dropping Bianca off at her home, Jacqui and I then took a trip out to Zone 7, to attempt to capture a more conventional panning subject. I submitted this image in the Set Subject Digital category, and received a silver rating for it. Apparently not enough of the main subject was in focus!


From there it was off for a lovely lunch at Durbanville Hills (we hadn't been there for ages, but will be back again as they now seem to have their house in order - the food was delicious!), and on our way home Jacqui noticed that there was action at the Durbanville Race Course. So we made our way there and spent some of the afternoon with a couple of beers trying to get some more images. 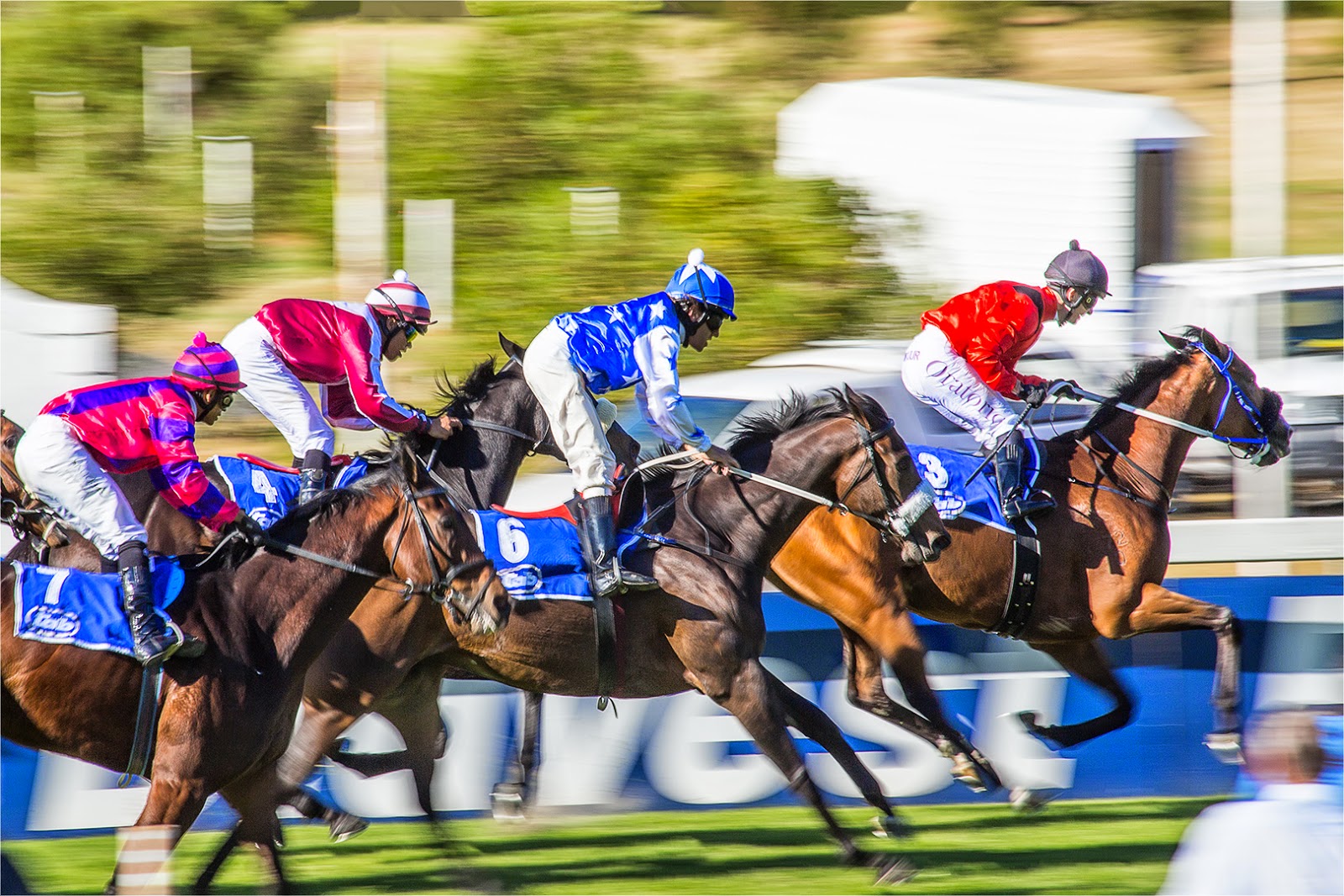 For me, the time spent earlier with Bianca was really beneficial, and from what I had learned while with her and then at Zone 7, I thought I ended up with some reasonably good images. I entered this one in the Set Subject print category, and while I only received a silver rating for it, it was placed as runner-up to the winning image!


I had more luck in the Open category, where my photo of the White Butterfly Bush (a macro stack of four images) received a gold rating. The mono Winter 2014 image received a silver - the judge said that there was too much water in the foreground, and some of the image should have been cropped off. For my particular taste, that would have made the image unbalanced, and would have cut off the reflection of the reeds, so I still prefer it the way it is!

And that was April at the TPS. Onwards and upwards towards May! 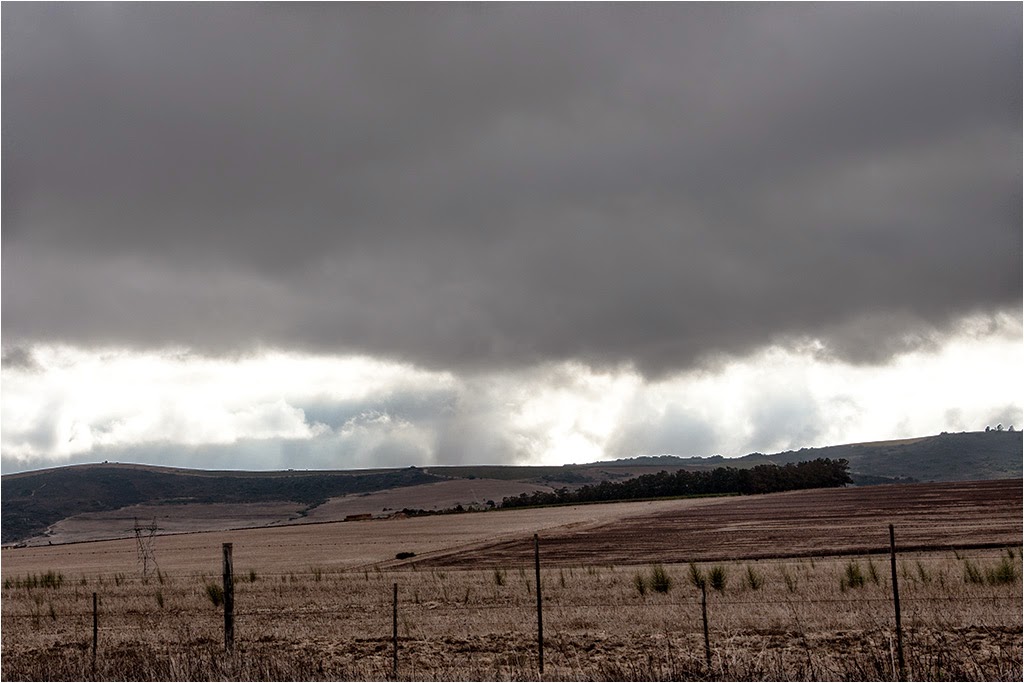 So - off we go on yet another day trip where the weather looked like it wouldn't play along. Driving towards Malmesbury, the heavy clouds and threatening rain really looked like they would dominate the day. But, everything had been planned and lunch had been booked, so we decided to just make the best of what was on offer. 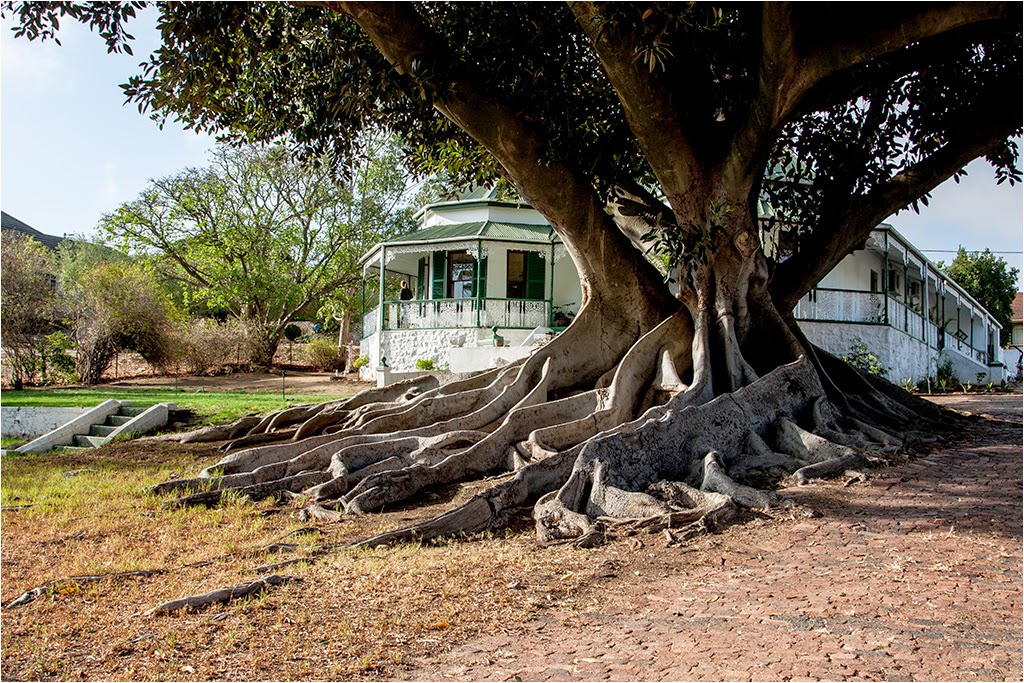 Into the beautiful little town of Malmesbury and we came across this home on the right-hand side of the road with the most amazing and imposing tree! What a grand old lady! 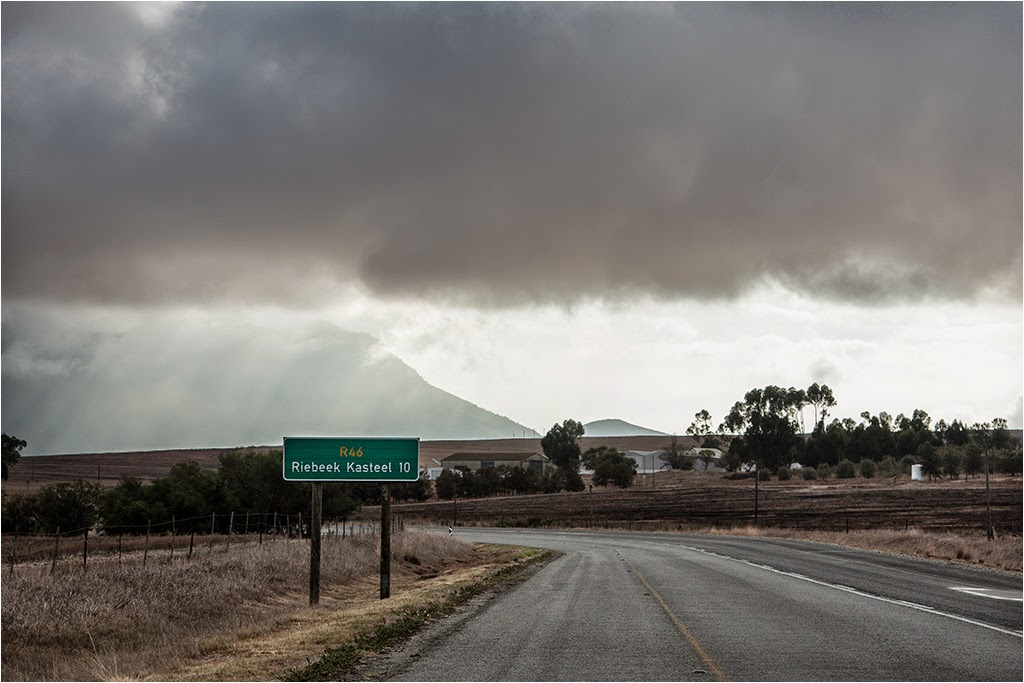 Through Malmesbury and on the way to the Riebeecks (Kasteel and West). Still quite cloudy but with the sun starting to make more of a presence. No rain as yet and things looking up. 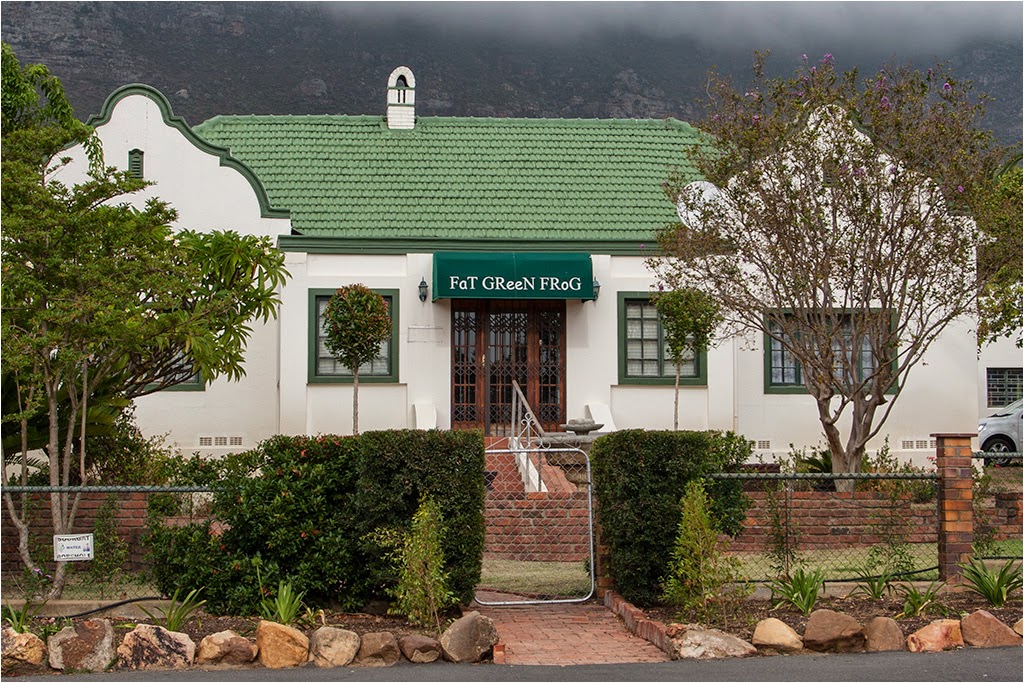 We decided this time to give Riebeeck Kasteel a miss and went through to see if there were any noticeable changes in Riebeeck West since our last visit some years ago. We came across this delightful little cottage and just loved the name! We didn't stop to go in, but found out later that they are a bead shop.

Shortly after turning around to head off toward Hermon, we came across this interesting complex (I unfortunately didn't get the name) who have really made their presence known in the town. These magnificent red cannas all along the road really make a statement, and the solar geysers on all of their buildings do as well.

We thoroughly enjoyed the little detour and were then off to Tulbagh, where we planned to have coffee. For the first time for quite a while, my trusted Garmin gave us the run-around. We got to Hermon ok, but then Gertie sent us off in completely the wrong direction. Happily, we had printed out the map of the route, and my trusty navigator sitting beside me was able to get us back into the game. 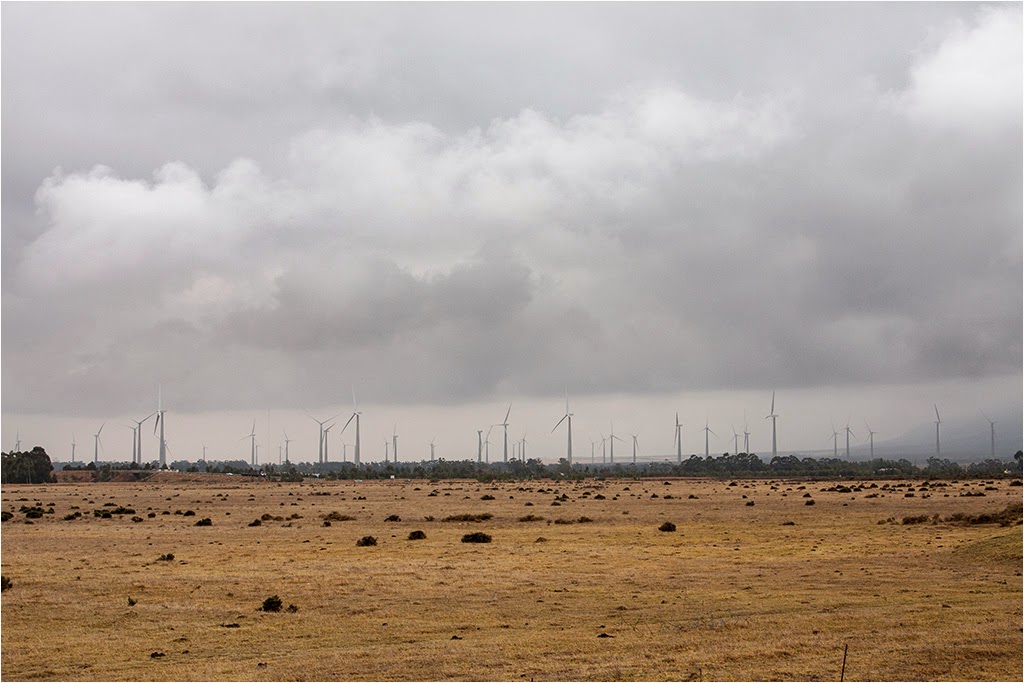 And then, quite out of the blue, we came across this magnificent wind farm. Again - great to see the folk making use of the elements to produce and conserve electricity. This turns out to be the Gouda wind farm, rated at producing 138mw when the wind plays its part. 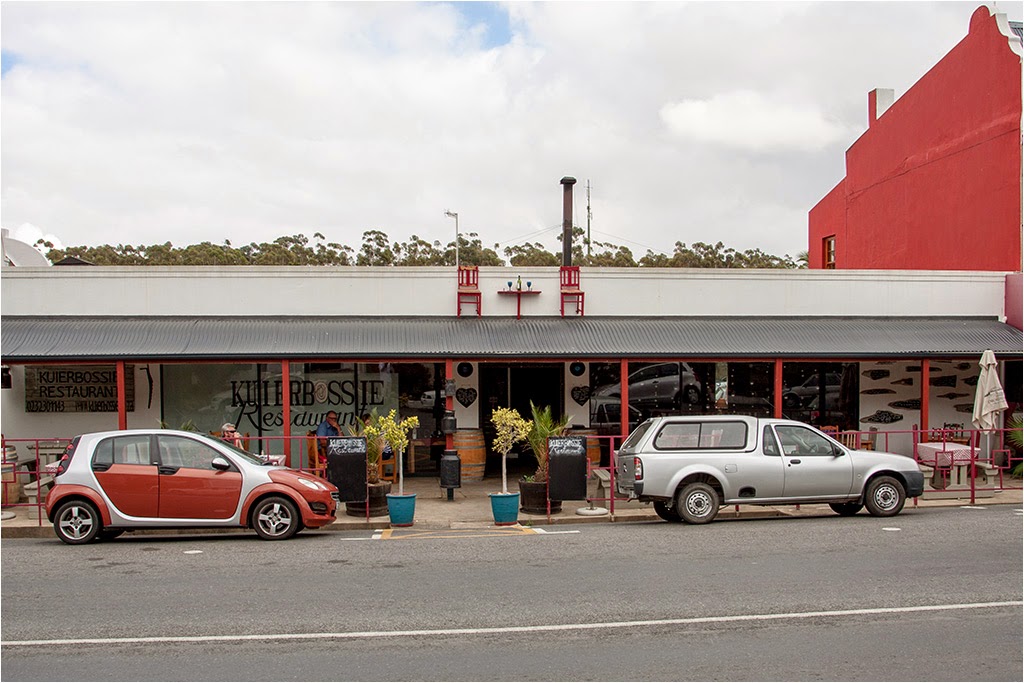 And so - finally into the delightful little town of Tulbagh. For a tiny town, there were certainly enough police vehicles around! We saw two when we arrived, and some more while we were there. Having a superb coffee at the friendly Kuierbossie restaurant, we witnessed the police arresting someone who had just robbed a local store. All this at no extra charge! After coffee, we then went looking for a fridge magnet for Jacqui, but alas, none was available. So it was off on the last part of the trip. We had planned to spend a few minutes in Wolseley, but the town really didn't look that interesting, so we decided to rather just head off for our booked lunch in Agter Paarl.

During a day trip some time ago, we drove over the Bain's Kloof Pass on the way through to Wellington. At the time, I saw a house at the start of the pass. It made an impression then, and I've always regretted not taking a photo of it. As we were in the area, Jacqui humoured me this trip and we made a small detour to finally take the photo. Such a typical South African image - obviously not much money around, but the priorities were there with a satellite dish to make sure they never miss a Stormers' match! 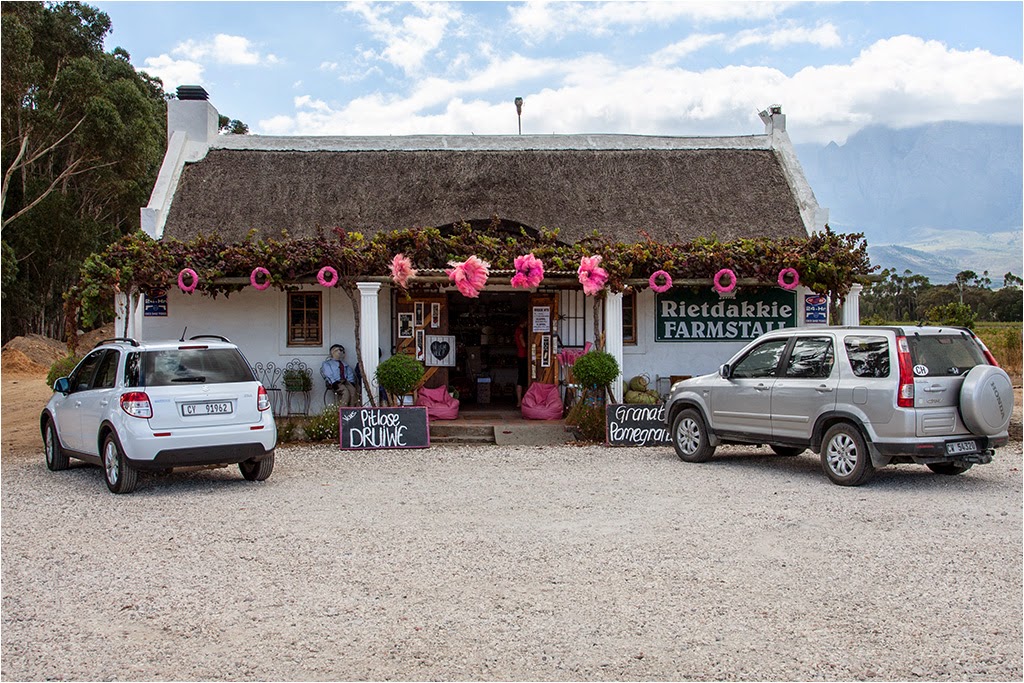 After the small detour, we were back onto the road towards Worcester, and came across this stunning-looking little farm stall. The pink feather dusters caught the eye and we had to stop for a photo and a look-around. Sadly, there was nothing inside that was as intriguing as the outside, but it was interesting nonetheless.
By not stopping in Wolseley, we had some extra time, so once we were on the Du Toit's Kloof Road, we decided that, rather than drive through the tunnel, we would use the extra time to go around the pass. It's been some time since we have done that, and were very pleasantly surprised by the quality of the road. The views, as expected, were as spectacular as ever. 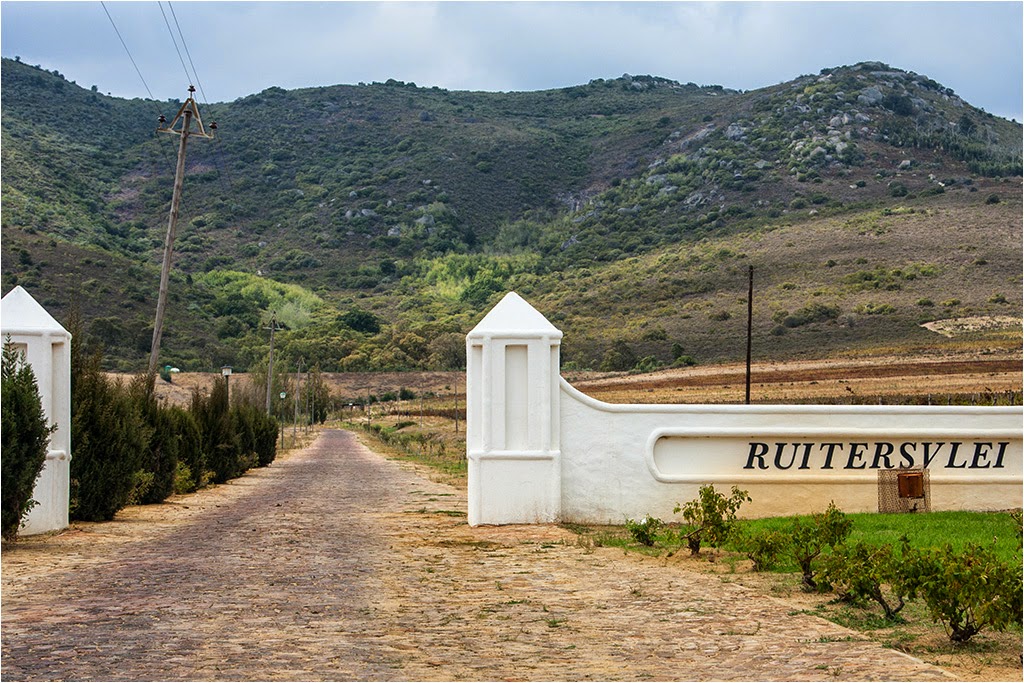 The restaurant of choice for the day was Mountainside, on the Ruitersvlei wine estate. We were first introduced to this estate many, many years ago, and this was a welcome return. Our timing was spot on, arriving 2 minutes before our booked time of one o'clock!
We were very impressed with the friendliness and helpfulness of the staff at the restaurant. They did their best to make us feel at home, and while the food was good, it wasn't exceptional. But the overall experience was enough for us to go back and try them again.
From there it was straight home. A round trip of just short of 300 kilometers.